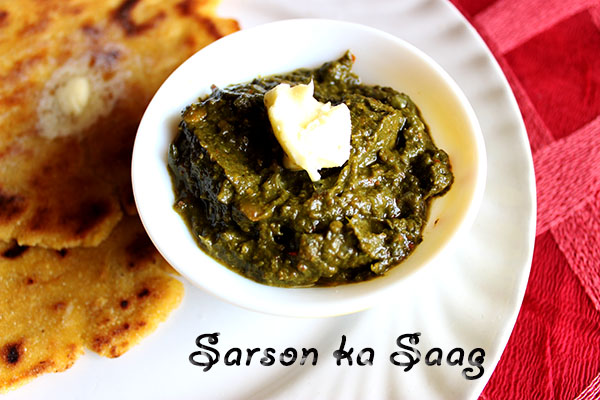 Sarson ka Saag or more aptly called as ‘Sarson da Saag’ is a traditional punjabi vegetable dish that is truly delicious and mouth watering. In Hindi ‘Sarson’ means mustard and ‘saag’ means any leaf based dish. Apart from sarson ka saag a few of the famous of saag are palak saag, chana saag bhaji, etc. Sarson ka Saag is mainly relished during the winters as one can get ample of seasonal green leafy vegetables in the market during this season and sarson is also known to provide warmth to the body.

The authentic Sarson ka Saag is made from mustard leaves (sarson in hindi). Along with that a small amount of spincah leaves (palak) and bathua leaves (Chenopodium album/ wild spinach) is also added. This lends the saag a unique taste along with a velvety texture to it. 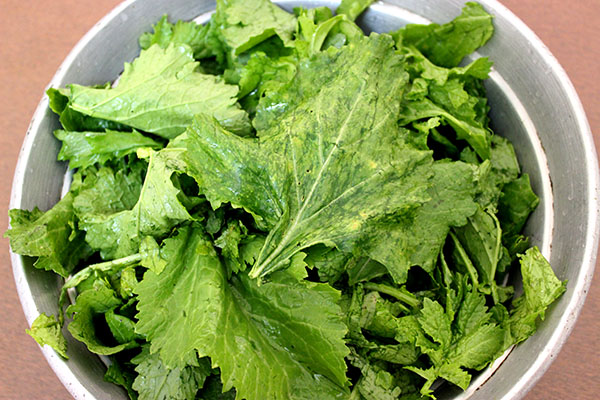 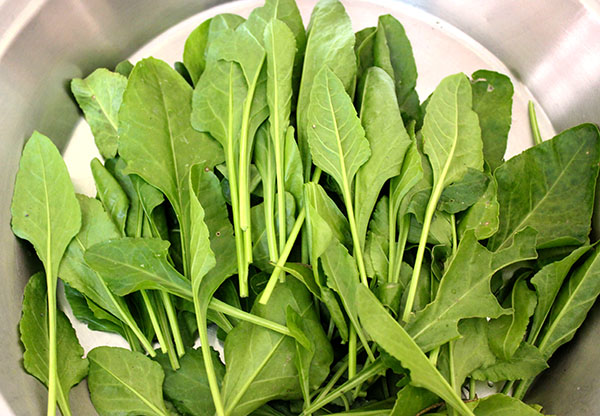 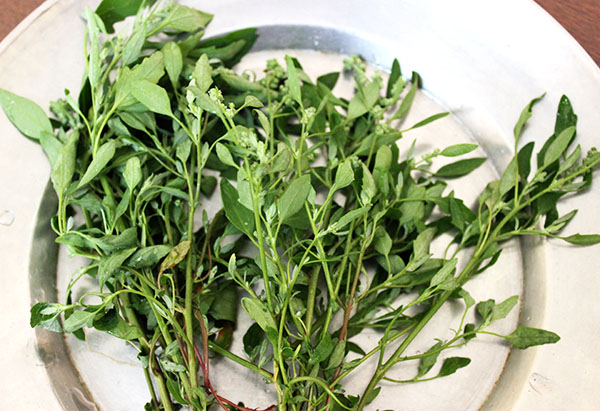 Traditionally in Punjab the saag is made from extremely young and soft mustard leaves. Traditionally it is made in a pot and is cooked on a slow heat and thereafter grounded or blended with a traditional blender or ‘mathani’ in the pot itself. This procedure, therefore, gives it a soft and crumbly texture. When making saag, one can also incorporate moderately thick stems of mustard stem. For this you have to peel the outer thick cover of the stem and add the inner soft part.

The mustard leaves usually have a acrid taste of its own. this is the reason it is usually teamed up with spinach and bathua leaves. The ratio of the three leaves to each other is very crucial. For about 1 kg of mustard leaves, take 1/2 kg of spinach and about 300 gms of bathua leaves. I also prefer to add a lot of tomatoes in this recipe which also lends the saag a nice tangy taste to it.

Sarson da Saag is best teamed up with Makki di roti (flat bread made from corn) and is served with loads of butter.  Since a lot of butter and ghee goes into these two dishes, it is mainly enjoyed during the winters when the body requires these calories and these two foods help to keep the body warm. I also make green coriander/dhaniya chutney as a side dish and serve it alongside the saag.

Making Saag is not that difficult as it is made to be, but is, indeed a long and tedious process. However, the final delicious saag you end up with is worth the effort you put in.You can make the saag in bulk and it can be stored in the refrigerator for 2-3 days. Anyhow I like to make it fresh each time and that too in small quantities since freshly made saag tastes much better… and in my home the saag is so loved by everybody that it is consumed within that day itself 🙂

How to make Sarson ka Saag:

This site uses Akismet to reduce spam. Learn how your comment data is processed.