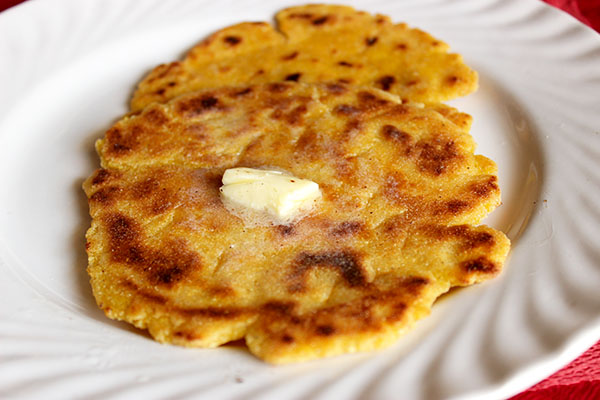 Makki ki Roti or famously known as ‘Makke di Roti’ is a popular Punjabi bread made of maize flour. It is usually made during winters since makki ki roti provides warmth to the body. But the downside is that it is a bit heavy on the stomach and, therefore, can be comforting during the chilly season!!

Both maize flour (makke ka atta) and corn flour (Arrawroot) are derived from the very same maize/corn. But they are vastly different from each other. Maize flour is the entire maize kernel milled into flour which contains both its protein and the fat part, and is yellow in colour while the corn flour is a fine white powder devoid of its protein part and purely consist of starch.

Making makki ki roti is a bit tricky for the newbies. But since cooking is an art that is cultivated over time, making makki di roti also requires a bit of practice. Kneading the dough to the right consistency is very crucial and rolling it requires a bit of skill. You can roll the roti directly on the rolling board or you can roll it by keeping the dough between a plastic sheet.

But in my case what I personally prefer is, flattening the dough with my hands, by gently applying pressure with my fingers. This way you also tend to get the characteristic serrated ends of the roti which you may fail to achieve while rolling it.

One can indulge in a guilt-trip once in a while, since Makki di roti is made with lots of ghee to make it crisp and topped with white butter. In authentic punjabi style Makki ki roti is best served with Sarson ka Saag and green coriander/dhaniya chutney. Anyway it can also be enjoyed with any other saag.

How to make Makki ki Roti:

This site uses Akismet to reduce spam. Learn how your comment data is processed.